Sushi: The Iconic Symbol of Japanese Creativity - SushiFork of Tulsa

7 Things You May Not Know About Sushi – SushiFork of Tulsa

When we think of sushi, we often think of the beautiful islands of Japan, where exotic cultivations of seafood collide with the signature grain of the Orient—rice. The iconic lure of sushi goes far beyond the popular concept of rice and raw fish—which is actually sashimi, which is but only one of many variations of traditional sushi. The universal popularity of sushi can be found in virtually every city in the world, where a sushi restaurant serves as a multicultural calling card of Japanese culture.

Sushi is to Japan what pasta is to Italy. An incredibly simple dish in composition—vinegared rice is combined with a variety of fresh vegetables and seafood, which is then paired with wasabi, pickled ginger, and soy sauce. What makes this simple and incredibly refreshing dish such a cuisine favorite?

Sushi originated in Japan in the medieval period, where the original composition was known as narezushi, which means “salted fish”. The origin of sushi at that time was incredibly different from the multifaceted form of the dish we know today. Narezushi was a form of fermented rice that was packed around salted fish as a tool for preservation due to food shortages that were common in pre-industrial Japan.

The introduction of vinegar with sushi during the fourteenth century helped in creating the signature taste of this dish that we know today. Vegetables and meat would soon be experimented with to create distinctive styles and tastes. It wasn’t long before sushi became a staple dish for the nation with the invention of the sushi restaurant.

The main ingredient in sushi is rice, which is prepared with vinegar for taste and preservation. Long grain rice is preferable, which is then pressed, originally with bamboo sprouts and then seaweed—which is the popular pressing agent used today. Sushi is primarily composed of vegetables and fresh seafood, with variations that also contain raw meat.

The preparation of rice is a defining principle that distinguishes the many types of sushi. Vinegar can be replaced with red wine for a bolder, less sour taste. Fish eggs are also a popular ingredient in sushi within Japan and an option at nearly every sushi restaurant. Sushi is an incredibly pliable dish that can be composed of whatever ingredients a consumer desires.

The common misconception is that sushi is primarily rice and raw meat, which is why it is important to point out the difference between sushi and sashimi. Sashimi, which means “pierced body”, is primarily not served with rice in Japan. Although a Western variation of sashimi is essentially just sushi with raw meat, the traditional form of sashimi consists of expertly sliced cuts of raw meat and seafood paired with Asian white radish, sesame oil, and ginger shavings.

When we examine the global variations of sushi, sashimi is usually prepared with the form of traditional sushi. Sashimi dishes in Japan are the centerpiece in a formal sushi restaurant and resemble perfectly curated works of culinary art. Although sushi is also a precise, geometric work of culinary art, sashimi is so beautiful in presentation it becomes a shame to begin consuming it. 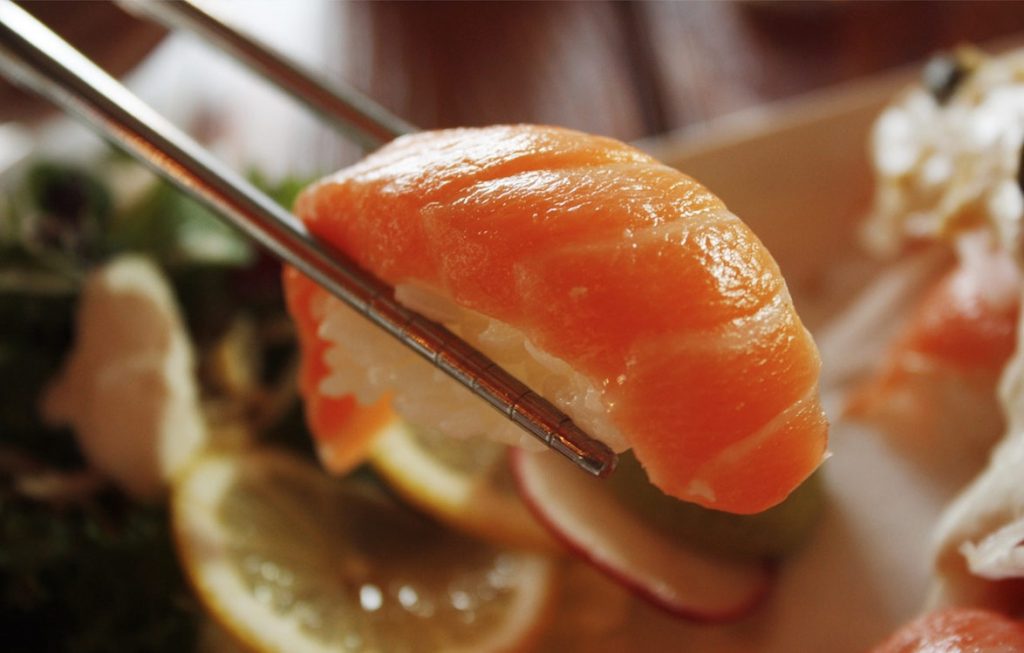 Every form of sushi is incredibly different, with every bite exposing a distinctive and sensory Japanese experience. Sushi is the official cuisine of Japan and an iconic representation of Japanese cuisine. Of the many varieties of sushi, each bite is cool, crisp and exotic.

Makizushi, which means “rolled sushi”, is perhaps the most recognizable type of sushi. Rolled in seaweed and featuring a refreshing mix of vegetables and seafood, this type is the primary sushi found in sushi restaurant chains worldwide. Makizushi that includes more than one ingredient is known as futomaki and is popular as a vegetarian sushi option.

Gunkanmaki is one of the more recent additions to sushi. This type of sushi is longer in length, with space left at the top for a spoonful of ingredients. Crab eggs are the most popular topping within Japan and offer a bold and unique taste to Western palates and authentic additions to any sushi restaurant.

Like sashimi, sushi can also display artistic talent in both presentation and composition. Temaki is a cylinder-shaped type of sushi that allows for decorative toppings at the top of the roll and is a popular attraction in a sushi restaurant. Temari, which means “handball”, is a circular-pressed form of sushi that is popular for its decorative abilities.

One of the most popular types of sushi in worldwide sushi restaurants is nigiri. This popular type of sushi which gets its name from the Edo period consists of a cylinder-shaped rice roll topped with cooked seafood. Nigiri is widely recognized as the official sushi snack, due to its founder creating the dish for workers on the run.

The California roll is a popular type of sushi in sushi restaurant chains in the United States. Known as uramaki, which means “inside-out roll”, this type of sushi places the rice on the outside of the wrap, which changes the traditional taste associated with sushi. There are many types of sushi that are presented as a dish without the rice being pressed or rolled, known as chirashizushi, meaning “scattered sushi”, this type of sushi offers a larger portion of sushi and can usually only be found in a full-scale sushi restaurant.

The Enduring Popularity of Sushi

There is nothing more refreshing and satisfying than sitting down to a plate of fresh Tulsa sushi. This unique and instantly recognizable dish is easily prepared due to its dexterity and lack of complex seasonings. Sushi restaurant variations litter the landscape of almost any city imaginable, proving that the iconic taste of vinegared rice and fresh seafood are multicultural in their reach. With many varieties to choose from, the status of sushi as a quintessential food for the entire world is ensured.

Read the SushiFork of Tulsa customer reviews on Google